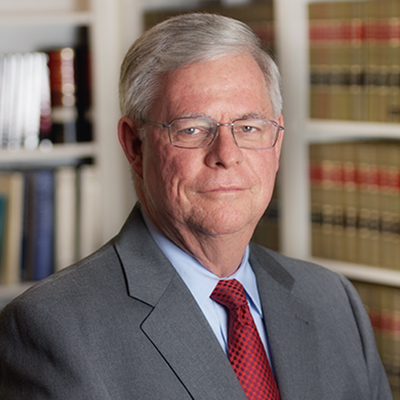 ABOUT:
Michael F. Coppins is a highly qualified and experienced civil trial lawyer who is admitted to practice in all Florida state courts as well as the United States Federal District Courts for the Northern and Middle Districts of Florida, and the Eleventh Circuit Court of Appeals. A founding member of Coppins Monroe and the firm’s senior shareholder, Michael has been practicing law in Florida for over 39 years. He is AV rated as a Preeminent lawyer by the Martindale-Hubbell Law Directory Service and has been recognized by Florida Trend magazine as one of Florida’s Legal Elite in two categories: attorney and mediator. He has also been selected as a Florida Super Lawyer by The Journal of Law & Politics, again in the categories of both attorney and mediator.

Following graduation from the University of Virginia, Michael served as a surface warfare officer in the United States Navy on ships in the Atlantic and Pacific fleets. He served aboard the U.S.S. Alacrity (MSO 520), during the Alacrity’s deployment to the 6th Fleet in the Mediterranean. Michael graduated from the Navy’s Destroyer School department head course in 1972, and then served as Operations Officer aboard the U.S.S. Roark (DE-1053), during the Roark’s deployment to the Gulf of Tonkin during the Vietnam War.

Following his Naval service, Michael attained his Juris Doctor degree from Florida State University, with Honors, and was admitted to the Florida Bar in 1977. During law school, he was selected to serve as a legal intern on the Commerce Committee of the Florida House of Representatives, and worked through two legislative sessions assisting in analysis and bill drafting related to banking, insurance, workers’ compensation, tourism, and economic development. Following graduation from law school, Michael served as a judicial law clerk to the Honorable Guyte P. McCord, Jr., Chief Judge, Florida First District Court of Appeal. He also served as a staff attorney in the Florida Department of Banking and Finance, Division of Banking, before entering private practice in 1979.

In 1992, Michael became Board Certified by the Florida Bar in Civil Trial Law. Certification by the Florida Bar includes a rigorous written exam, and recognizes an attorney’s knowledge, skills, proficiency, and professionalism. Certification represents The Florida Bar’s highest evaluation of the competence and experience of a lawyer in a particular practice area. Having honed his civil trial skills for thirteen years, Michael founded Coppins Monroe in 1992 as a firm specializing in civil litigation. In 1995, he became a Certified Circuit Court Mediator and further enhanced his qualifications in 1997 by becoming Board Certified by The Florida Bar in the area of Business Litigation. Dual Florida Bar certification in Civil Trial Law and Business Litigation is a status attained by a small percentage of Florida lawyers.

Michael has been certified by the Florida Supreme Court as a Circuit Court mediator since 1995. He maintains an active practice in both mediation and arbitration, and has mediated hundreds of civil cases arising in both Florida and Federal courts. Michael is also frequently retained to serve as the arbitrator in lawsuits committed to arbitration rather than litigation.

Michael has published articles in professional journals and legal education publications, to include Economic Credentialing: A Blank Check for Hospital Boards? Miami Medicine (1995). Michael has also lectured at the Florida State University College of Law on the subjects of civil trial practice, mediation and arbitration.

Michael is married to Tallahassee native Martha O’Dea Coppins, and is the proud father of three grown sons.