Michael Coppins was a keynote speaker at the annual banquet of the William H. Stafford American Inn of Court on September 23, 2019. The program featured reflections from four founding members of the Stafford Inn on the Inn’s mission and impact on their careers as part of the celebration of the Stafford Inn’s 30-year anniversary. Other featured speakers included Retired Judge James Joanos (Akerman), US District Court Senior Judge Robert Hinkle, and attorney Barry Richard (Greenberg Traurig). 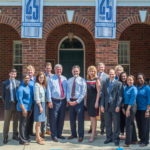